1. What is Impedance Control and Signal Matching

2. Why is impedance matching needed?

3. What is a high-speed signal or circuit?

4. What are some of the factors affecting impedance?

5. How to achieve impedance matching?

1. What is Impedance Control and Signal Matching

Impedance control is matching PCB trace dimensions and locations with the properties of the substrate material to make sure that the strength of a signal traveling along a trace is within a required range. The continual increase in device switching speeds is confronting engineers with signal integrity (SI) problems and eventually, most devices are going to have to deal with SI issues. So, Printed Circuit Board (PCB) traces can no longer be treated as a simple point-to-point connection. Traces need to be considered as transmission lines and impedance matching becomes necessary and required in order to lessen or eliminate the impact on SI. By following good design practices and approaches, many potential signal integrity issues can be averted or mitigated.

So, here we’ll talk about the importance of impedance control, causes signal integrity issues, and ways to avoid them. 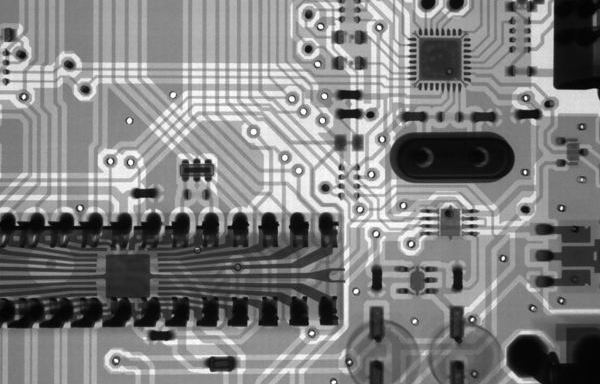 2. Why is impedance matching needed?

The function of a PCB trace is to transfer the signal power from the driver device to the receiving device.

Power needs to be propagated throughout the length of the trace. But maximum signal power can only be achieved with matching impedances on the PCB.

So, that is why we have there is a need for impedance matching. We want as much of the power from the driver to end up at the receiver.

If special care is not taken in the PCB layout stage, then high-frequency signals will definitely degrade as they propagate from the driver to the receiver. If the result of this is viewed on an eye diagram the signals will be very distorted and power levels will be different as the signal propagates from the start to the end.

3. What is a high-speed signal or circuit?

IPC defines a high-speed signal as one when the rise and fall time of a signal is fast enough that the signal can change from one logic state to the other in less time than it takes for it to travel the length of the conductor and back. So, as the signal propagates from the source to the receiver and back – if the rise and fall time is faster than that, then you definitely are dealing with a high-speed design and have to consider high-speed issues.

A misconception is that the clock speed of the circuit determines whether the circuit is operating at high speed.

4. What are some of the factors affecting impedance?

Some of the variables on which the impedance of a trace is dependent on are more or less fixed by the PCB manufacturer and some of them are defined by the PCB designer. Power is transmitted uniformly across the length of the trace across the PCB when there is uniform impedance.

Therefore, a trace that has a very uniform cross-sectional geometry needs to be constructed.

Critical issues can arise if impedance matching is not performed.

This diagram shows a microstrip.

H represents the distance between the trace and the adjacent plane. T is the trace height or copper thickness. Typically, this will be 35 or 70 microns depending on how the stack-up is defined.

“W” is the width of the trace. Among these 3 variables, the trace width I the one that is within the complete control of the designer.

A targeted impedance on a PCB trace can be attained by varying its width.

It’s important to note that the voltage may vary significantly as it is propagated along the trace.

The presence of an impedance change or discontinuity will certainly cause a reflection back to the source of that signal.

A major issue with boards that don’t have impedance matching is the presence of reflections. So, some of the energy of the signal will reflect toward the driver and the remaining signal will continue onward. When you look at the waveform for this, a pure square wave will not be seen. Rather, a distorted waveform with overshoots and undershoots and some ringing will be observed. Any unmatched impedances on the PCB will result in some electromagnetic interference (EMI). As a result, the miss-match of the impedance will cause some electromagnetic radiation in that localized area where this transition occurs, and where these reflections appear.

The radiation can couple its energy to neighboring traces or, affect some susceptible components on the board. 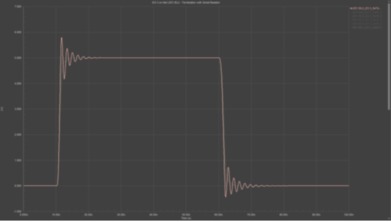 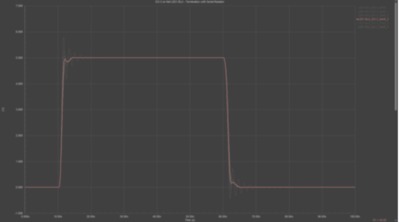 The graph on the left shows a net with potential signal integrity issues, the graph on the right is the same net with a theoretical series termination resistor of approximately 40 ohms added. Image from altium.com

Consider a trace, where the impedance measures 40 ohms. When this trace enters another layer, the impedance goes up to 50 ohms, due to the geometry of the PCB. In this case, we will have some energy reflected at the transition point. So, reflection problems will be seen at that point and serious signal integrity issues can be encountered in high-speed designs.

When routing the PCB, special attention needs to be paid to any mismatches in impedance, and efforts should be made to ensure that impedances are maintained as well as possible throughout the part of a routed signal.

For products requiring CE and EMC approval special consideration to this point is needed.

5. How to achieve impedance matching?

There are a few important design criteria that we need to consider. Keep in mind that many of the problems relating to reflections relating to EMI can be prevented by good PCB design techniques. Another crucial point is the choice of materials.

In the past, typically FR4 was specified. But, with high-speed designs, the use of the correct laminate is critical. The use of a material with a lower dielectric constant (Dk) is advisable and preferred. This not only ensures the best signal performance, but it will also minimize any signal distortion or phase jitter of the signal.

From the table, you can see that material like Isola FR408 provides a consistent dielectric constant of 3.7. So, it is essential to choose the laminate material carefully. Otherwise, you might see an inconsistency in operation between board batches: one batch of boards might work and the next batch of boards you order might not.

Another important criterion is the loss tangent or dissipation factor. This is a measure of the signal loss as the signal propagates down the transmission line on the PCB. For very high-frequency designs you would want to select the lowest loss material.

From the table, you can see that the different laminates having varying loss tangents.

So, you would need to select the material that is the most suitable for your application and specify this in your manufacturing notes. Ensure that the bare laminate used in the PCB fabrication process complies with IPC4101 grade. It is important to ensure good dielectric spacing between the copper and the laminate that it is bonded to in order to achieve a consistent electrical performance of the trace running across the PCB.

An additional point to consider in selecting the laminate material is the fiberglass weave pattern. A typical PCB core and prepreg substrates are constructed from various woven fiberglass fabrics bound together with epoxy resin. The glass and epoxy each have different Er/Dk values, resulting in an inhomogeneous medium for signal propagation. A loose weave pattern produces less uniform dielectric constants in the PCB laminate that can cause trace impedance variation and propagation skews.

The higher the frequency, the more evident this problem will be. The tighter the weave pattern, the more uniform the dielectric constant. So, it is better to practice to choose a tighter weave so the signal moves over more glass than anything else. The outcome of this will be a very consistent dielectric constant throughout the PCB.

Including power planes that can supply a signal return path below each signal path is an essential step in controlling impedance. Preferably, these planes should be dispersed through the board stack up and designed so a minimum of one plane adjacent to each signal layer is carrying controlled impedance routing.

By avoiding discontinuities (such as a split or blowout in the power plane, underneath any critical routing), the return path current flowing through the plane will seek to follow the same physical path as the route on the signal layer.

In addition to choosing the appropriate order for signal and plane layers, the material properties of each layer need to be determined. This includes:

› Trace lines should be kept as short as possible and reduce lengths wherever possible. If the trace lengths are fairly long, terminations should be used to prevent reflections.

› Routing stubs and discontinuities, which add to the reflections and degradation of the signal quality, should be avoided.

› For differential pair routing, try and ensure that the signal pairs have the same length.

› Use of back drilling – for a thick backplane where the signal goes from the top layer to one of the inner layers, the remainder of the copper barrel of the via or the pin of the press-fit connector will be a stub, resulting in reflection. Back drilling removes the unwanted copper. It is a technique used to remove the unused portion, or stub, of the copper barrel from a thru-hole in a printed circuit board.

› Consider using immersion silver as a surface finish rather than ENIG. Immersion silver results in less insertion loss (lossy) than ENIG purely because the nickel content in ENIG is very lossy and due to the skin effect, it is not very good for high-speed designs. The flatness of the pad is just as good as ENIG and it is more workable than ENIG.

› Reduce the size of antipads on plane layers. Antipads are where pads are removed, or copper is removed on plane layers where the pad should not or does not connect to that plane. Sometimes the anti-pad size is too large creating unnecessary voids in the plane. By making the anti-pad a little bit smaller allows for more plane continuity resulting in a cleaner signal and return path.

› Specify the solder mask thickness. Solder mask also has a dielectric constant. Even thickness across the board can prevent unpleasant surprises.

Impedance control can be verified after the PCB is manufactured by using test coupons (a test coupon is a PCB used to test the quality of a PCB fabrication process. Test coupons are fabricated on the same panel as the PCBs, typically at the edges. Coupons are then inspected to ensure proper layer alignment, electrical connectivity, and cross-sectioned to inspect internal structures. Coupons can be designed custom for a PCB or selected from a vendor library).

You can ask your PCB manufacturer to design a test coupon or ask them to place test coupons on your working panels. Typically, test coupons are placed at different locations on the working panel, which will represent a good cross-section of the PCB. Then, by using a Time-Domain Reflectometer (TDR) the impedance can be tested. Subsequently, a report will be generated to indicate if the characteristic impedance was achieved on your PCB.

The overall performance and EMC behavior of electronic equipment is not only determined by the design of the circuitry and geometry of the layout but also by the power distribution network.

Careful attention needs to be paid to:

With the increasing use of high-speed devices, board designers need to consider multiple factors that could impact PCB performance. One of these considerations is impedance control, which has serious significance on signal integrity and the operation of the board. By understanding the causal factors for impedance mismatch and acquiring the knowledge of design practices that can mitigate or remove impedance issues, the PCB designer can create a truly engineered solution. A robust design that can be manufactured into a reliable and high performing printed circuit board.